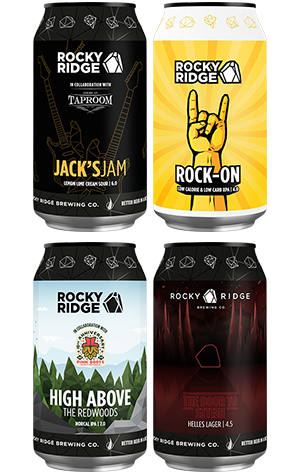 Sure, they've got a stack of top brewers heading to their Jindong farm for the first Retro Beer Fest in early November, but something as trifling as that isn't going to stop Rocky Ridge from knocking out another four new releases beforehand.

Jack’s Jam is a lemon lime cream sour brewed in collaboration with Singapore's American Taproom that, as you'd expect, is heavy on the citrus character. Reminiscent of a citrus-laced cheesecake or panna cotta, the fruit sweetness here is tantalising when set against a gentle creamy mouthfeel and modest acid.

Putting pastry-inspired sours aside, the Rocky Ridge team has the health conscious in mind with Rock On, a low calorie, low carb XPA that doesn’t lack in flavour. Sure, there's only 4 percent ABV, less than 120 calories, and 2.5g of carbs per tin – plus it's gluten reduced AND vegan – yet while this number is guilt free it still offers up vibrant hop character atop a crisp, clean body.

IPAs might be what Rocky Ridge does best, however, and High Above the Redwoods is yet another stellar example of how they roll. Showcasing the 5th Annual Pink Boots hop blend from Yakima Chief Hops – one consisting of HBC 630, Idaho Gem, Loral, Talus and Triumph varieties – this "Nor-Cal" IPA is big on ripe tropical character as well as dried citrus, pine and some sweet berry. Proceeds go to Pink Boots Society Australia.

Wrapping up the foursome is The Door to Helles, a helles lager. This is a favourite style for this particular Crafty writer, and what you have here is a classic interpretation that keeps things approachable with a malt sweetness and bready character that's entirely moreish. Backed by a herbaceous, floral hop profile, this one is both easy-drinking and full-flavoured.