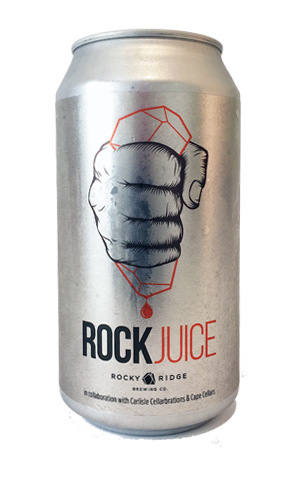 Early in 2018, the trio of collaborators behind last year's Rock Juice reunited to squeeze more juice from the rock. The sequel amplifies the original's hazy appearance and perceived fruit content while building on the the mouthfeel; however, the 9 percent ABV remains the same.

For Rocky Ridge's core range of beers, the brewery sticks to the “Everything we brew, we grow” ethos; for the increasingly frequent collaborations, the team is happy to draw from beyond the fifth generation dairy farm's perimeter. Thus, here Rocky Ridge’s estate grown pale malt base is complemented by 10 percent malted wheat, 5 percent raw wheat and 10 percent rolled oats. Estate grown Cascade, Chinnook plus a small amount of the Rocky Ridge resurrected Flinders hops were joined by Citra and Columbus sourced externally. While no bittering hops were used, the beer enjoyed five hop additions during primary fermentation and was twice dry hopped – an astonishing 60 kilograms of hops ended up in the 2,000 litre batch.

While discussing the hop regime, Head Brewer Hamish "Hammer" Coates says it’s probably the most expensive beer he’s ever made with nearly $3 worth of hops per 375ml can – equivalent to the tax excise per can – however he notes the beer displays incredibly low bitterness. The result is an opaque lupulin mist swirling in the glass, from which tropical fruit juice – mango, pineapple and orange - aromas rise. Such fruitiness continues through the full, almost creamy mouthfeel to the last sip, followed by a lasting alcohol warmth. Despite the turbid appearance, Hamish is quick to point out that extracting maximum hop flavour was the intent rather than making something look hazy just to be on trend.

And other good beer stockists across WA