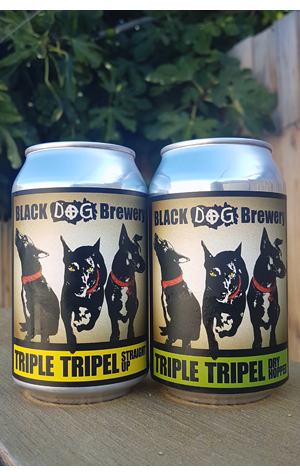 When it comes to celebrating your sixth birthday as a brewery is there an appropriate number of tripels you should brew? For James Booth, at Black Dog Brewing, he settled on three: Straight Up, Dry Hopped and Barrel Aged. While the last of these is currently dozing in Liqueur Muscadelle barrels, the other two are available now to toast in celebration of the six years of beers at the Glenrowan brewery-on-a-winery.

The Straight Up is a beer that’s very much about yeast and malt, making it something of a straight down the line tripel. It pours a golden amber, with fruity, spicy ester driven aromas. There’s also some cloves and a rounded sweetness reminiscent of honey, while you'll find flavours of homemade orange cake in there too.

As for the Dry Hopped version, the use of both Citra and Cascade create a wholly different, if connected beer. As soon as the can is cracked, aromas of pine come straight off the beer, joined by a light citrus. While the beer retains some of the esters of its Straight Up sibling, the dry hopping also takes away some of the sweetness, making for a beer that’s altogether leaner and – despite registering the same alcohol content – feels less boozy too.

Sovereign Liquor for those in the Victorian High Country

And more to follow once James has finished vintage