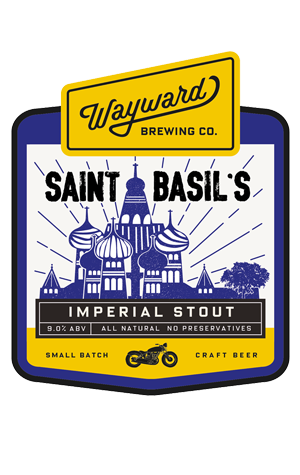 Despite the entire state of New South Wales being in drought and half of it seemingly on fire, a glance at the calendar confirms that, yes, it is still, technically, winter. So it therefore, technically, still makes sense for Wayward to be releasing a nine percent ABV Russian imperial stout to see out the last vestiges of the supposedly cool season.

Saint Basil’s is a no nonsense, straight up-and-down imperial stout, a beer you could almost write a description of before you’ve even bothered opening the bottle. It’s a beer you can buy and know you won’t go wrong.

What marks it apart from a regular stout is its intensity. All the dials have been nudged to the right. It’s awash with potent roasted malt characters of dark chocolate, coffee and bitter cacao, which give way to even more intense notes of smoke, stewed fruit sweetness and a hearty oak influence. All that said, it never forsakes balance and thus, somehow, straddles its intensity with outright approachability. Strong as a bear but as warm and comforting as a hug from a babushka – what more could you want in winter?