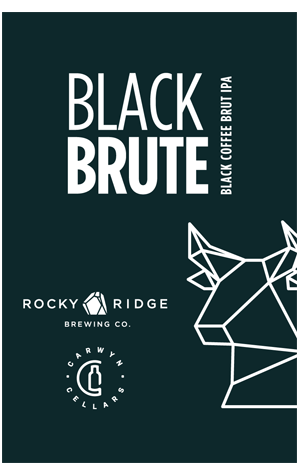 Well, that didn’t take long. No sooner has a new style arrived than the barstardisation begins... And would it come as a surprise that these two collaborators – Melbourne venue Carwyn Cellars and WA brewery Rocky Ridge – would be shaking the tree?

The origins of Black Brute began with venue owner Ben Carwyn on a West Coast holiday. He met brewer Hamish Coates, with the former keen to do something with coffee and Hamish excited about the nascent Brut IPA style; the ideas soon coalesced into a carbonated cold brew coffee.

The now familiar Rocky Ridge "House Blend" coffee was sourced from Margaret River Roasting Company and, with little to get in the way, this is its purest expression yet. It's used in a beer that's suitably lean, supported by a substantive yet integrated level of booze that provides texture and weight. The alchemy continues with minimal bitterness and enzyme action drying the finish enough to mimic black cold brew coffee.

With many questioning the merit of the Brut style, it may well be this dark, transcontinental outsider that shines a light on its potential. Either way, the lesson here is clear: never let a family holiday get in the way of beer!