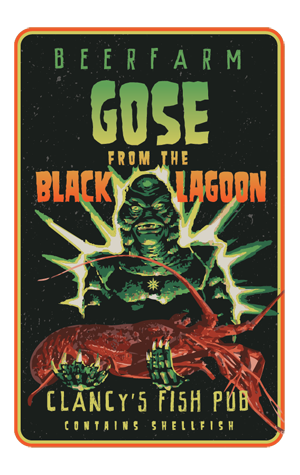 While the Beerfarm may be landlocked, their collaborator’s affinity with the ocean has manifested in a quirky take on one of the most enduring renaissance styles of the past half decade. To think that only four years ago gose was nigh on extinct and, yet, here we are with a playful creativity that is normally reserved for styles with a rich history is somewhat mind-bending.

Mind-bending is also a term likely to crop up when describing this black gose with lobster. Lobster, you say? In a beer? Yes, folks!

A broth made with locally sourced lobsters (WA rock crayfish), was added to the beer and the lobster tails were then cooked in the kettle before being devoured by the collaborators – not too bad for brew day catering... All of this swirls in a dark malt base that runs a little sweet, accompanied by an ephemeral savoury note and a subtle cola-like character that recedes under the citrus edge provided by Simcoe and Cascade hops. Lactose and salt additions provide a rounded mouthfeel that offsets the firm lactic sharpness. As for the lobster, its appearance is rather muted; however, those sampling at the Clancy's Fish Pubs will likely be elbows deep in the fruits of the sea anyway.

Available now from the Beerfarm and all four Clancy’s Fish Pub venues.