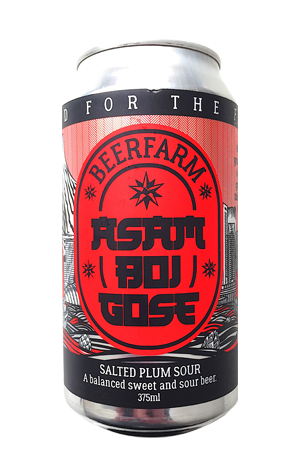 In 2011, Daniel Goh opened the first craft beer joint in Singapore inside the Chinatown Hawkers centre and, three years later, launched Smith Street Taps in the stall next door. For those that have never been to Singapore, your humid arrival through the bustling labyrinthine second floor is akin to Indiana Jones finding the Holy Grail that just happens to be surrounded by some of the best food in the Lion City.

Drawing from this rich culinary history, Daniel and the Smith Street Taps suggested using asam boi, a dried salted sour plum, in a gose base for the initial batch of this beer back in May. This release was talked about with such reverence that it’s been revived in cans and is also a nod to Beerfarm’s growing connection with Singapore.

Best described as salty, sour, fruity and sweet, the mouthfeel feels full and leans in favour of sweetness. The unique fruit flavour is reminiscent of condensed, savoury plum – if that’s a thing – however, muted mandarin and overripe strawberry also come to mind. It’s intriguing and very drinkable.

From the Beerfarm, selected WA locations and, if you happen to find yourself in Singapore, Smith Street Taps.