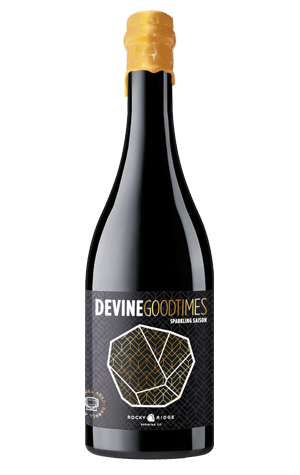 Chances are, if you've read about a beer from WA in the past couple of years on The Crafty Pint, the words originated with Guy Southern or, to give him his online handle, Goodtimes Craft Beer. Not this time around, however. And that's for a very good reason: Guy was involved in the conception and brewing of this one.

He travelled south from Perth to hook up with the team at Rocky Ridge, where they were also joined by folks from de Vine Cellars and set about creating the 4,723rd (or thereabouts) collaboration beer of the farm brewery's young life. It's a combination of a few things, inspired by thoughts of "lazy lunches, Christmas feasts, beach picnics and dropping into friend's homes as the weather warms". That led them to a saison aged in chardonnay barrels and finished with a champagne yeast.

It's on the bigger size for the (admittedly very broad) style, both in terms of its 8 percent alcohol content and its full, smooth mouthfeel. Guy says he was hoping for something a little leaner and in keeping with the "sparkling" of the title, but the outcome is different rather than lesser for turning out as it is. Despite spending just two months in the ex-wine barrels, the impact of the oak is noticeable both in the flavour and aroma it contributes but also in the way it softens the beer, while any residual chardonnay characteristics are enhanced by the use of hops, such as Hallertau Blanc and Sorachi Ace, selected for their white wine aping abilities.

Taken together with full, honey like sweet malt flavours and hints of saison spices and bergamot on the nose, it's more something to savour at the end of a meal than a sparkler with which to open, with a subtle yet distinct dryness underpinning things, and in its big bottle format Devine Goodtimes is well suited for the collaborators' desired sharing with mates.