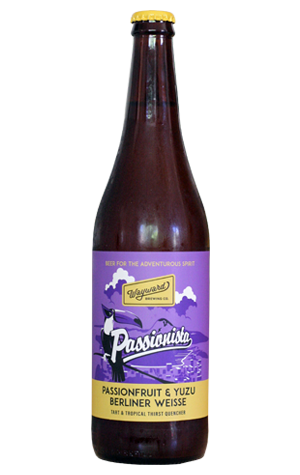 It appears the dogs have won the day at Wayward. Until recently there’d been a low level feline/canine power struggle at the brewery where you’d find cat prints all over the actual beers – the likes of Sourpuss, Passion Of The Puss and even an entire Festival Of The Puss – while pups strutted around the brewery itself to be immortalised on the famed Dogs Of Wayward photo wall.

But, with the recent rebrand of Wayward’s beers, cats are evidently on the way out. The AIBA trophy-winning Sourpuss has been renamed simply the Raspberry Berliner Weisse. Festival Of The Puss, held last weekend, happened under the banner of the Berliner Weisse Weekender. And Passion Of The Puss has now been re-released as this: Passionista.

It’s still effectively the same beer that impressed and refreshed so many around Sydney town last summer – a Berliner Weisse with passionfruit and yuzu up the wazoo. It’s aromatic and lively with all that tropical and citrus fruit character, then tart and utterly moreish at just 3.8 percent ABV. If you enjoyed Passion Of The Puss on its last release, Passionista is simply a rose by another name.