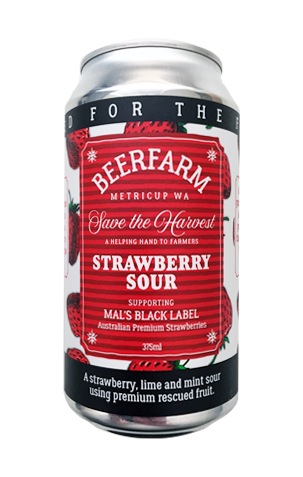 The Beerfarm’s "Established For the Future" ethos is expressed through many endeavours, in this case via the saving perfectly good fruit from landfill. Early in 2018, The Pineapple was created after tonnes of rescued overripe fruit was reincarnated as a Berliner Weisse whose cans were tasteful adorned with head brewer Josh Thomas’ noble profile on a crisp $50 note.

Fast forward to the tail end of the year and a nationwide needle contamination issue forced many strawberry growers to dump this year’s crop. Once again, the Beerfarm’s swift action rescued fruit from Mal’s Premium Strawberries and took them on a tropical holiday vibe thanks to the addition of lime and mint.

Lurid in the glass and probably deserving of a cocktail umbrella, the fluffy mimosa effect is corralled by fruit and a Berliner Weisse like level of acidity – although this doesn’t linger. Instead, the influence of the mint renders Strawberry Sour a touch more savoury than expected; however, it’s a welcome surprise that also lends length to the palate as subtle lime joins the party as the band embarks upon a dry coda.

Available in limited release from the brewery and select WA stockists