Beer Rocky Ridge Out Of The Blue 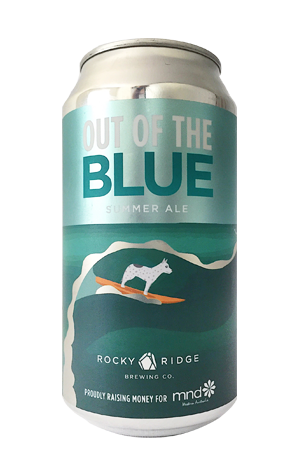 Rocky Ridge owner and head brewer Hamish Coates describes Out of the Blue as the second in a “series of charity beers started with the idea that we should be giving back to the community wherever possible, given the support we receive from our locals.”

As with last year’s Sarcoma fundraising beer, 100 percent of profits are donated to charity, in this case Darren’s Ride, which supports those suffering from Motor Neurone Disease (MND) and research into the debilitating disease. Darren’s Ride celebrates the life of Darren Whitby and was founded by his wife, Kirsten, who met the Rocky Ridge team at the brewery's first birthday. Darren’s love of the beach, outdoors, summer ales and his Blue Healer pup, Darcy, are now immortalised on the can, while the Out of the Blue name refers as much to the ocean as the speed of the disease which led to Darren passing just two months after diagnosis.

The single malt, single hop beer presents with a slight haze and inviting tropical (mango and pineapple) and light orangey citrus aromas aided by the NEIPA yeast. These continue through the light body with soft but stippled bitterness and moderately dry finish – a perfect summer beach beer befitting Darren’s memory.

More information about Darren’s Ride can be found here and on MND here.

Out of the Blue is available from Darleen's Busselton and select WA retailers.