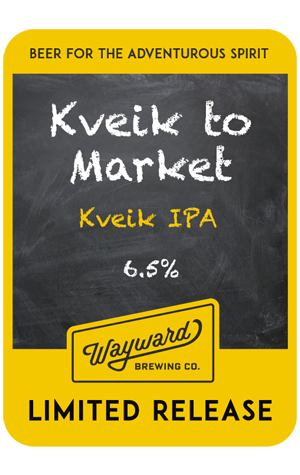 OK, let’s get this out of the way. However you attempted to say the word kveik was almost certainly wrong. Correctly pronounced kwie-ick, the titular yeast in Wayward Brewing’s Kveik to Market IPA might well turn out to be one of the biggest trends in Australian beer in 2019.

Originally isolated from a traditional Norwegian farmhouse style beer, kveik has been steady gaining popularity worldwide as a sort of magical super-yeast that not only ferments faster than almost every other commercially used strain, it can do so in conditions that would usually render beers fermented with traditional beer yeasts as off-flavoured sludge.

Clocking in at an astonishing seven days from mashing to packaging, Kveik to Market is one of the earliest commercially available beers fermented with the yeast in Australia. Although the beer might look like a soft and juicy, fruit bomb IPA, it tastes anything but. The base style is a West Coast IPA loaded with the dank and resinous hop compounds that have fallen out of favour during the NEIPA craze of the last few years.

As such, Kveik to Market packs a big and lingering bitterness, a balanced sweetness and a wheelbarrow full of pine and orange hop aroma and flavour. Most surprising of all is the lack of pronounced farmhousey-ness that one might expect from a beer brewed this way. There’s a little something hanging out in the background, but if you were to go in blind you’d be hard pressed picking that, just over a week before hitting taps, this beer was still grain, water, hops and a vial of incredibly exciting yeast.