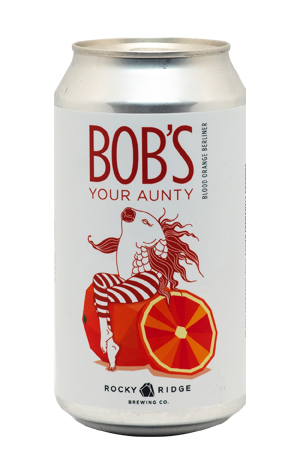 Take one part Rocky Ridge Brewing, one part South Fremantle Brewing, add a dash of blood orange juice and Bob's your... ermm... aunty? The latest collab between the two WA brewing companies is a spritzy Berliner Weisse brewed with 30 litres of freshly squeezed blood orange juice sourced in the South West and fermented with Rocky Ridge's house strain of lactobacillus and kveik yeast.

Pouring a hazy straw colour with a pillowy white head, Bob's Your Aunty is as easy on the eye as it is on the nose, but most importantly it shines on the palate with a vibrant lactic acidity and a seemingly everlasting taste of fresh orange that's reinvigorated with every mouth-puckering sip. Minimal hop character is true to the Berliner Weisse style and, alongside the lowly 3.4 percent ABV, makes for a very drinkable tinnie that, unlike most aunties, you'll want to visit again and again and again....