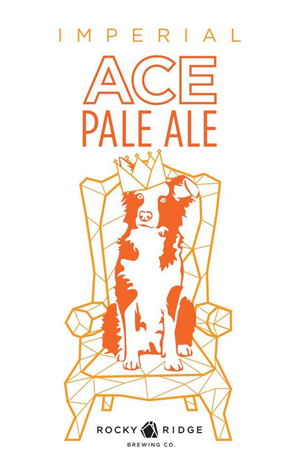 What does a brewery do when their trusty brewdog fathers a litter of eight adorable brewpups? Create a beer to celebrate the occasion, of course.

Ace, the trusty Border Collie, already has his own beer in the Rocky Ridge range, but to celebrate becoming a dad the Ace Pale Ale has been ratcheted up to imperial status. Imperial Ace is a triple dry-hopped offshoot of what was already a bountifully-hopped American pale ale in its own right. Here, however, the beer offers up huge passionfruit, melon and guava characters thanks to the staggering 26g per litre of hops added in the brewhouse. Lofty additions of Chinook, Ella and Citra hops result in big hop flavour and aroma that carries on the palate with a generous 75 IBUs of bitterness, with barely a single one fading away before the next sip.

Imperial Ace is big and juicy but well balanced too: massive in every way without being exhausting to drink. It might be a beer brewed to celebrate the future generation of brewpups, but stylistically it's a throwback to the ferocious double IPAs of the past. And it's a damn good throwback too.