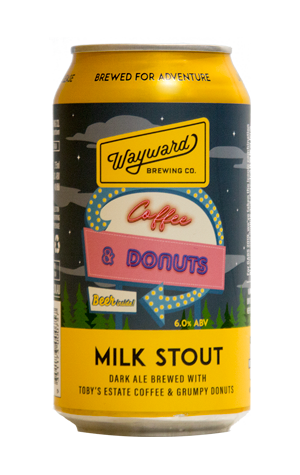 Wayward went through more than four kegs of their 2019 GABS beer in Sydney alone, so it’s no surprise they’ve decided to rebrew it, stick it in cans, and release it nationwide. Although an early version appeared in Dan Murphys’ Festival Variety Pack – one that led them to issue this statement, this is a refined version, with a touch of hops to alter the flavour ever so slightly.

Inspiration for the beer came from ice hockey teammates Jason Adair and Lachlan Berger, who play in Wayward-sponsored league, The Beerginners. It just so happens the former is bar manager at Wayward, and the latter a roaster at Sydney coffee institution Toby’s Estate. To help tie beer and coffee together, the brewing team also decided to incorporate neighbours and previous collaborators, Grumpy Donuts.

In order to create the beer, the Wayward team spent time at the sensory deprivation lab at Toby’s Estate to select the perfect cold brew parameters, which they later scaled up to the brewery’s 300 litre pilot system. The resulting cold brew was thrown in the beer, along with cinnamon, lactose, chocolate wheat malt and a heap of actual donuts.

The result is a highly fragrant beer, with aromas of vanilla and cinnamon. Its flavours are complex but well-balanced, with the initial sweetness – that somehow manages to taste precisely like a donut should – making way for a soft, lingering bitterness from the cold brew. The two work perfectly together, not too sweet, but not too bitter either, well supported by a mildly-carbonated and smooth mouthfeel that rounds out the entire experience.