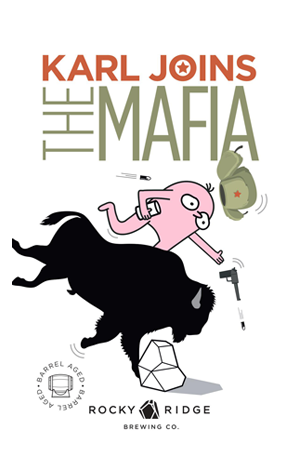 A 9 percent ABV imperial white stout brewed with coffee from a boutique coffee roastery in Margaret River in collaboration with a tiny craft beer bar in a Singaporean Chinatown complex... That's a lot to digest but, then again, this was initially brewed for GABS, and is another Rocky Ridge beer worth savouring.

Karl Joins the Mafia is the latest release in a series of beers adorned with the "Karl" persona, an unlucky character who always seems to land in worrying predicaments. Thankfully, there's nothing to worry about when it comes to what's inside the can, which is a souped up variant of Rocky Ridge's controversial White Buffalo white stout.

For this reincarnation, the team have brewed the same rich, golden base that very much tells the story of a stout, but have imperialised it and loaded it with a heap of roasted coffee. It has all of the qualities of a brutish imperial stout: a thick, viscous body, roasted malt and chocolate, assertive bitterness and, of course a bold, tantalising coffee hit that just keeps on going.