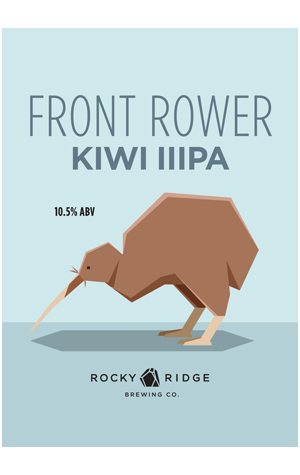 Ordinarily, the Rocky Ridge brewers like to champion local and celebrate homegrown but, occasionally they'll devote some time in the brewery to celebrate beer from a far off land, or at least from our neighbours across the Tasman Sea. Front Rower is one of a stack of beers from Rocky Ridge as part of their End of Beer Year en masse release and pays tribute to New Zealand's diverse hop industry.

Coming in at a whopping 10.5 percent ABV and a potentially tongue-shredding 77 IBU, the brewing team clearly haven't held back in creating a triple IPA bursting at the seams with fresh Rakau, Motueka and Pacifica hops, added at the rather colossal rate of 23 grams per litre.

A roll call of the standard IPA adjectives apply here: think dank, piney, tropical and resinous. Times them by 10 and you'll be on the money. Ka Pai!