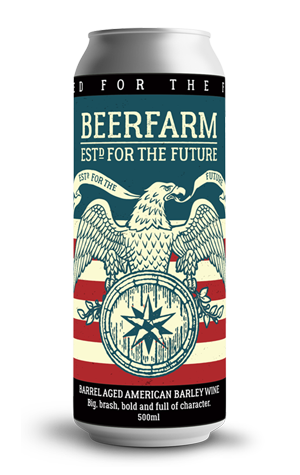 Historically, Beerfarm have liked their beers to make an impression when they hit the market and are looking to do just that with the first packaged release from their barrel program. The Metricup brewers have taken their tried and tested American barleywine recipe then thrown the beer into locally sourced cab sauv barrels, locked it up for 12 months and thrown away the key, before returning to put the finished product into cans and releasing it to the masses.

The gutsy ale is unashamedly American in style with a massive dry hop consisting of Chinook, Simcoe, Target, Mosaic and Centennial, combining to lend the beer enticing earthy and grassy hop characters that enhance a massive, malt driven base that's as sweet as it is viscous. Thanks to the extensive time in barrel, it lands at a brash 10 percent ABV, while that time in barrel has also added a hefty dose of funk, both in the form of residual red wine character and a tartness that sings when they’re put toe to toe against the moreish toffee and caramel elements of the beer.

The Beerfarm crew claim this release is the result of leaving the brewers to their own devices, a potentially risky decision that has ultimately paid off. The result is a somewhat crazy, complex barleywine that has plenty to offer. Some might find it a bit over the top, but take your time over it and you'll likely find each sip more rewarding then the last.