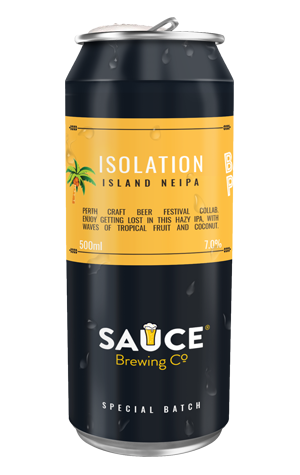 Western Australia loves its East Coast IPAs - must be something about the IPA always being juicier on the other side. So, for the 2019 Perth Craft Beer Festival, Sauce Brewing showed the isolated city some love by making a collaboration beer just for them; they hung onto some kegs and shared a few with Brisbane and Melbourne venues, but the tinnies are exclusive to those out west.

It’s not hard to see why this was dubbed an “Island NEIPA”. With a radiant yellow like the island sun, and a fluffy white head to match the drifting clouds, it looks the part before you even take a sip. The full island vibe comes with the taste, though: a glut of Sabro hops brings pineapple galore and an edge of creamy coconut to the party, a tidal wave of flavour, if you will, while the bitterness is left at low tide.

Some kegs appearing at Sauce's brewery and at East Coast venues.

Cans at WA retailers only.