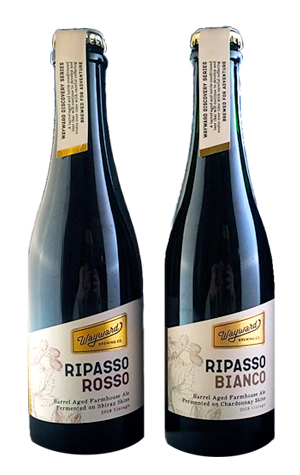 Continuing to blur the lines between wine and beer, Wayward have once again experimented with the Ripasso method, which involves the refermentation of wine - or, in this case, beer - on grape skins to give it added depth and intensity. They learned a few things from the initial release in 2018, which has been used to improve this year’s, the most pertinent of which was to not just release one beer, but two.

Ripasso Bianco and Ripasso Rosso are both part of the Wayward Discovery Series, a collection of barrel-aged and bottle-conditioned releases, an idea almost four years in the making. In a way, the two beers are very similar. They’re both the same base beer, fermented on skins from Tyrrell’s Wines in the Hunter Valley. After primary fermentation, they were both matured for four months in 2,000 litre French oak foeders alongside a Brett yeast blend inspired by some of the great American wild ale producers, Hill Farmstead and Logsdon Farmhouse Ales. But, despite those similarities, they’re also quite different.

Ripasso Bianco is spritzy, with an aroma of pepper-like spice and pours a deep golden hue. The first sip is fresh and bright, somewhat reminiscent of a sparkling wine, but is then quickly followed with just enough Brett-derived funk and oaky notes to make it interesting. The finish is dry and ever so mildly tannic, enough to consider - but not require - another sip.

In the other bottle, Ripasso Rosso is more sour than funky, instead trading a dry, tannic aftertaste with a sour bite from the high level of carbonation. The flavours and aromas are reminiscent of bright red fruits, which leave with a slightly sweeter and more tart impression than the Bianco.

Together, they make a familiar yet contrasting pair, designed to experience together to appreciate both fully. In the words of Wayward’s head brewer Shaun Blissett, the pair are “built for cellaring,” and will only continue to develop and delight with time.