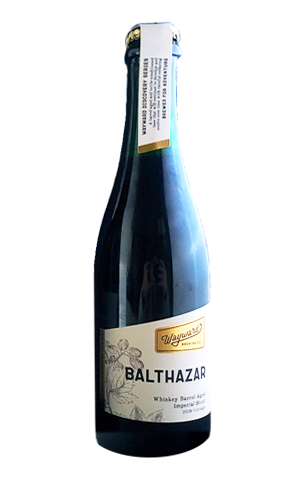 Joining the two Ripassos as launch beers in Wayward’s Discovery Series is Balthazar, an imperial stout aged for six months in ex-Jack Daniels whisky barrels. The base beer was built upon expertise gained in using dark malts in the development of Coffee & Donuts, their 2019 GABS release. As expected, that gives it the typical flavours of chocolate and caramel. Then, however, things start to get more interesting.

Ageing in barrels imparts flavours of burnt toffee and vanilla, whose slight sweet influence can also be detected in the aroma, as well as the expected whisky notes. There’s even a hint of coffee in the aroma and, indeed, that’s derived from the addition of just enough beans from Five Senses’ Dark Horse blend to add a tiny flourish to the interplay of flavours in the mouth.

Any harshness from the roasted malts has been mellowed out by the ageing, resulting in a smooth finish that teases bitterness, followed by sweetness, and back again, finishing with an alcoholic warmth. There’s a lot going on, and each component vies for your attention one after the other, but without any single one emerging on top – giving the beer great complexity, but also great harmony.

As for the name, that’s a tribute to a little black rabbit named Balthazar, a former Wayward regular who remains with us only in spirit. To Balthazar!