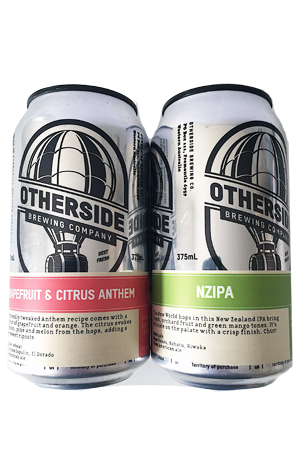 For September 2019, Otherside have focused their experimental juices on a pair of fairly straight-ahead IPAs by today’s standards, although there is considerable difference between the two.

Grapefruit & Citrus Anthem seasonally twists their core range IPA, with the tweaked recipe aiming to amplify the OG via grapefruit and orange additions which come off less pronounced than expected. Slightly lighter in colour than Anthem, there’s orange sherbet in place of melon and a new but subtle creaminess; however, bitterness remains firm and the finish dry, leaving the beer a curiously shy iteration.

NZ IPA, on the other hand, exudes an assured charisma. Brilliantly clean throughout with a touch of dankness – a corollary to the lifted hoppy bitterness which exists unobstructed. Although not labelled as hazy, there is that too. And although tropical, it’s in the shape of bright green mango and papaya skin rather than a fruit bowl pastiche. In much the same way that freshly grated ginger is bright, juicy and perfumed, Otherside’s NZ IPA just sings of green New Zealand hops - it’s the kind of IPA that stops the noise.

Available now from the Myaree brewery, Freo.Social (on tap) and Otherside stockists nationally.