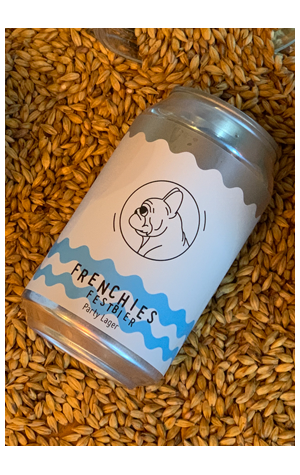 I don’t know about you, but when I think about the marriage of King Ludwig I to Therese of Saxe-Hildburghausen, which, if I’m honest, isn’t as often as it used to be, I think about Sydney’s premier French bistro and brewery.

Frenchies have gone all out in their usual fashion for their 2019 Oktoberfeast event and brewed a pitch perfect German festbier that head brewer, Vincent De Soyres, has rather more aptly named, a Party Lager.

There’s great news for the dozens of Reinheitsgebot fans out there, too: the Party Lager is an all-German affair with malt from Bamberg, hops from Hallertau and a Munich yeast. For all the normal people who don’t give a shit about an idiotic “law” that’s been amended roughly six million times since its inception, all you need to know is that this is a delicious beer, made from good quality ingredients (regardless of what they are) by a brewer who knows what he’s doing.

But enough about that. The Party Lager is one seriously crispy boi. As with most festbiers, it’s a fine balance between being a bit more malt forward and stronger than a Pilsner or Helles whilst still being drinkable enough that the punters are going to want to drink litres of it. Vince has added a bit of light and dark Munich to the base Pilsner malt to achieve just that. A healthy dose of Hallertau gives the classic noble hop floral and spice while keeping the bitterness on the lower end of the scale.

All in all, you’ve got a clean and crispy 5.6 percent ABV German lager that practically demands you squeeze yourself into a long table amidst a horde of drunken Australians and positively saturate your insides with beer and bratwurst. Just like in Munich!

Best enjoyed at Frenchies Oktoberfeast (but in cans too)