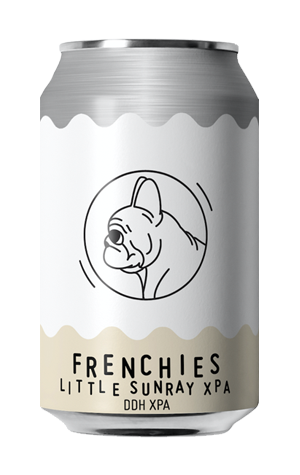 There’s something slightly illicit about drinking a beer named Little Sunray as a TGIF afternoon bevvy when it’s an overcast 13 degrees. I’d love to say it’s a warming beam of light but the fact my drinking hand ends up being absolute Kelvin before I’ve had three sips is hard to ignore. Sure, this lovely little light-bodied, hop forward pale ale is actively making me colder, but in the best possible way!

There’s no denying XPAs are rapidly establishing themselves as de riguer in the craft beer sector. Granted the bigger, boozier beers are more prevalent than ever, but so are the lagers and XPAs at the other end of the scale. We seem to be in this sort of strange time where most of the more popular beers are either more than 6.5 or less than 5 percent ABV. The most popular craft styles of a decade or so ago now sit, largely unloved, in a sort of no man’s land.

Anyway, enough of that. Frenchies have described their Little Sunray XPA as fruity, light and breezy and it’s pretty hard to disagree. As a double dry hopped pale, obviously the key component here is the use of 100 percent Idaho 7 hops. Idaho 7 has only been available for a couple of years and has found many fans through its prominent use in soft, fruity NEIPAs. In this XPA, it leads with pineapple, orange and melon on the nose and more of the same on the palate but with a distinct resinous note to finish.