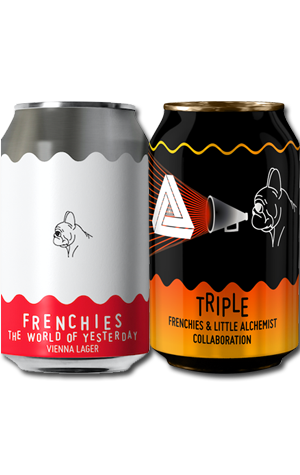 I think what’s most endearing about Frenchies is their ability to continuously take on classic styles that rarely see the inside of a bottleshop fridge and absolutely nail them while pumping out DDH hazies and milkshake IPAs at the same time. It’s a sort of best of both worlds type situation, as long as you’re the kind of beer nerd who is positively fizzing at the thought of picking up a four-pack of German lager to balance out the mouth-stripping humulus assault of almost every other beer released in 2020.

Brewed for their annual Oktoberfeast, The World of Yesterday is a Vienna lager inspired by a Stefan Zweig novel of the same name. Also, I feel I have to mention that I practically demanded that Vince brew a Vienna lager earlier this year on Instagram [What do you want – a medal? Editor].

It pours an elegant deep gold with a long lasting, off-white head that throws off those classic German lager yeast esters. There’s also toasty malt and caramel with a hint of floral hops, toasted white bread with touch of light honey and soft malts, and a spicy hop bitterness that lingers, finishing dry and clean. I’d say this one is closer to the classic Vienna style opposed to the sweeter, more modern takes predominantly out of North America. In a perfect world, this little sweetheart should be drunk by the litre with roughly seven metres of assorted wurst.

The second classic style to get a release is a collaboration with the Little Alchemist Brewing Co that happened all the way back in the Before Times (February). Triple, a Belgian tripel, then spent eight months in can, avoiding the very worst of 2020 to gracefully emerge just in time to see minimal community COVID transmission and a spectacular US election. Must be nice.

It pours with a riot of complex Belgian character leaping from the glass: banana esters, faint clovey phenols, and a malt character that presents almost like a sponge cake. The trick to a great tripel is somehow finding that balancing point between sweet malts, spicy hops and hot alcohol and I reckon they’ve more or less nailed the brief here. The booze is nicely hidden behind a veritable wall of slightly honeyed malt while still lending a soothing warmth. They’ve also managed to limit any significant residual sweetness so Triple is surprisingly drinkable for a 9 percent ABV Belgian beast.