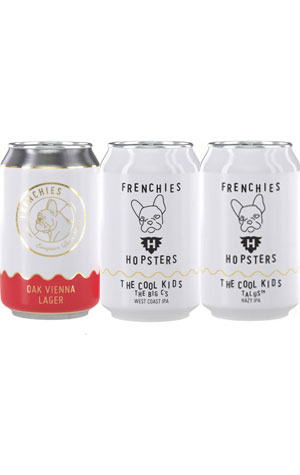 Almost every day, someone stops me in the street and asks: “Judd, pray tell... I simply have to know, what would you say is Sydney’s premier French brewery?” And every single time my answer is the same.

Disgusted with the shameless display of audacity, I pull a cartoonishly large ACME-branded mallet from my trousers and turn their body into an accordion with one powerful blow. However, if I were to answer truthfully without extreme Warner Brothers style violence, you simply cannot go past Frenchies.

Not content with just an oaked version of the house pils, Frenchies have re-brewed their Vienna lager and run a heap through their ingenious oaking system. It’s essentially a hop cannon but instead of blasting beer through hop cones or pellets, it’s running through oak pieces to achieve the optimum level of oakiness. A Vienna lager is a very fun style to give a bit of oak flavour. The smooth vanilla oak is a great compliment to the Vienna malt’s toasty bread whilst rounding out the mouthfeel too. With Oak Vienna Lager, the oak character is more pronounced on the nose than on the palate and that’s a good thing. Too much more would unbalance the relatively delicate lager.

Continuing their Cool Kids series of IPAs with Hopsters, Frenchies have gone with one of Yakima Chief’s biggest hype hops, Talus, in a hazy IPA. I’m a big fan of Talus and it has a fair bit to do with the fact the variety is actually a daughter of fellow hype hop Sabro. Sabro is typically utilised for its intense pineapple and sweet coconut cream, which for some can be a little too much. Talus, on the other hand, brings some of that coco-pine to the table but with a heap of other tropical fruit and piney dank. In this hazy, there’s an intense burst of pineapple, grapefruit, yellow peach and coconut up front, with a flavour that’s a mix of hop resin and sherbet. Even with the wheat and oats in the malt profile, it’s totally stripped back with a medium bitterness and dry finish. Very good stuff.

If you want to sucker me in to buying an IPA, tell me there’s Chinook in it. Easy as that. The Big C’s is a back to the future 6.5 percent ABV West Coast IPA brewed with Chinook and Lupomax Citra. Pouring like the aesthetic ideal example of a West Coast – a crystal clear burnished gold – The Big C’s oozes an old school citrus and dank. Mandarin, orange and sticky pine combine with a hint of crystal malt and a crisp bitter bite to create a terrific drinking experience and one of my favourite IPAs of the year.