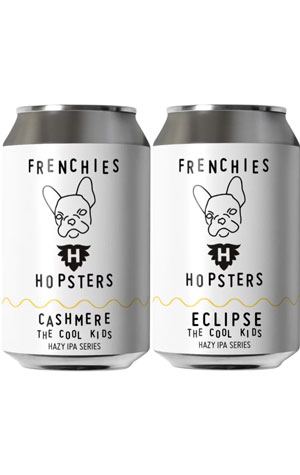 With so many new, frequently fascinating, hop varieties around, little wonder a number of brewers have reverted to something we first saw on these shores from the likes of Mikkeller and Bridge Road around a decade ago: single hop series. Designed to give the drinker an idea of the differences (and similarities) to be found when you switch Simcoe for Sabro or Mosaic for Motueka (pretty sure I've made variations on knowing your Saaz from your Eclipse enough over the years now), said brewers have never had so many toys to play with.

Frenchies and Hopsters kicked off their series late in 2020 when Idaho 7 was chosen for The Cool Kids I. Already in 2021 two more are out. They've chosen to pump them into a hazy IPA base, one with plenty of pillowy softness and cloudy sweetness upon which the hops can prostrate their fruits. In the case of Cashmere, it's not hard to see why it survived a rigorous hop breeding program: there are elements reminiscent of the citrusy US hops of yore, tropical vibes and even a little welcome spice on the back palate of the sort that would embellish a fruit slice. As a result, it seems to change a little with every sip – at times brekkie juice, at times Pasito, at others tropical IPA; happily for the brewers, enjoyability remains consistent throughout.

The variant showcasing newly-monikered Aussie variety Eclipse looks weightier in the glass, odd given their similar structure and booze content, and serves up an equally dense aroma, thick with creamed oranges. There's a suggestion of something a little stalky or smoky in there too, at least to taste, a characteristic I've picked up in at least three Eclipse-heavy beers to have come my way since the big unveil. It means the beer actually finishes a little more bitter and dry than Cashmere, despite its initial textural oomph.