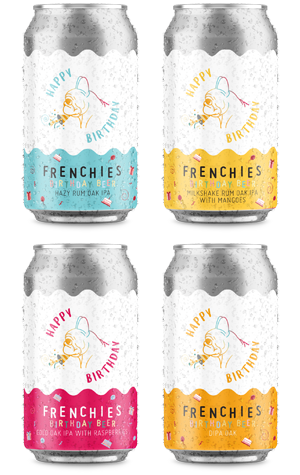 And it’s a hearty "Bon anniversaire!" to Frenchies Bistro and Brewery as they celebrate their fifth rotation around the sun. To mark the occasion, they’ve released a birthday four-pack of oaked IPAs. Yes, that’s correct, four different IPAs, all oaked up the wazoo. Clearly, you wouldn’t want your fresh and vibrant IPAs anywhere near a porous mass of wood and bacteria, so Frenchies have once again used their modified hop cannon to oak up some beers quickly and cleanly. First up, we’ve got a duo of rum barrel IPAs, one of the mango milkshake persuasion and a hazy. Then a raspberry cold IPA and DIPA on good old American oak.

A Rum Barrel Mango Milkshake IPA is exactly the kind of fever dream I’d expect someone might have for their birthday. All of those words make sense in isolation, but are they really all supposed to be in the same sentence? The thing I always look for in beers that have mango in them, is if they’ve got any sign of that glossy sheen you always get from other mango drinks. I am very happy to say, I detected a sheen! I’m on board already. First surprise here is that the aroma is much more IPA than fruit bomb. All three listed hops are readily identifiable over the mango milkshakiness. Passionfruit, pineapple and coconut line up with mango and vanilla to lay the foundation for what’s surely going to be a teeth-shatteringly sweet IPA. Second surprise, it’s really not that sweet. You’ll be bracing for that lactose sugar hit that never really arrives. There’s a hefty bitterness too, which aids in cutting back that perceived sweetness. Unfortunately, the rum barrel gets lost a bit but, without doubt, it's the best example of this style I’ve ever had.

Now we’re going in for a Hazy Rum Oak IPA. This one has been brewed with a hop combo of Cashmere, Mosaic and Sabro and a malt base loaded with oats and wheat so let’s see how that plays out with the smooth, rummy oak. So there’s a heap of coconut at play here. Given the Sabro, Cashmere and oak, that’s probably fair enough. I’m also getting a great troipical burst of mango, lemon, rockmelon and vanilla. The body is razor sharp for a hazy, which really allows the hop compounds to shine with a clean, dry finish. The oak smoothness is there and I nearly gave up searching for the rum but, lo and behold, right at the end there’s a just a bit of Malibu to round things off. Without doubt, the best example of this style I’ve ever had.

Let’s put away that rum barrel and head back into slightly more familiar territory with… an Oaked Cold IPA with Raspberries? Sure, absolutely, why not?

Like all of Frenchies' beers, if they’re supposed to be clear, you better bloody believe they’re going to be like a brilliant sparkling crystal. The addition of raspberries also gives a pink blush making it a very pretty beer to behold. For the raspberries and oak, Frenchies have gone with a tried and true NZ hop combo of Nelson Sauvin and Riwaka, which is a very bold choice. What results is a nose of mixed berries, lemon/lime and oaky herbaceousness. Flowing onto the palate then is a complex dessert of raspberry coulis, citrus peel bitterness and mild honey and vanilla sweetness. Gives the impression like you’ve stumbled onto the final course of a very fancy degustation menu. Without doubt, the best example of this style I’ve ever had.

The last and largest of the oaked birthday foursome is Frenchies' homage to Russian River’s original DIPA, the Blind Pig IPA, which was also aged on oak. I don’t think Vinnie Cilurzo had much access to Idaho 7, Cashmere or Cryo Citra hops (owing mostly to them not existing in 1994) but I’m very excited to see how this turns out.

Hoo boy! After the tropical fruit fest of the previous, DIPA Oak is somewhat further down the other end of the spectrum. Lovely dank paw paw and marmalade ooze from the glass. I love the slight hit of old school crystal malt melded with the vanilla oak character. The bitterness is resinous and staunchly backs up that bit of sweetness. I was still a child when the original Blind Pig became a hit, so I can say without doubt: this is the best example of the style I’ve ever had.

If you're reading this in time, we've got mixed four-packs up for grabs for members of our beer club, The Crafty Cabal. More here