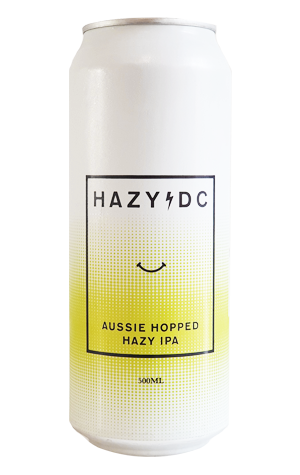 The instant Balter’s Hazy poked its nose onto the scene earlier in 2019 to mass excitement, it became clear a trio of limited hazy IPAs released nation-wide in 2019 would have no problem gaining attention (though, if we’re being honest, it probably could have been predicted even before then). So, with the release of the third, Hazy/DC, Balter has again given the people what they want.

Like Dazy before it, Hazy/DC made its debut at GABS 2019 before eventually coming out in 500ml tinnies. And, like the Aussie rock band it’s named for, it proudly displays a lightning bolt as part of its name (which we're unable to replicate in text form, however...).

Unlike the hazy Balter beers before it, Hazy/DC boasts an all-Australian hop lineup to shake you all night long. Galaxy, Vic Secret and Enigma bring their aromas like frenzied power chords for the nose - orange juice and pineapple are on lead guitar, mango, passionfruit and banana provide the backing vocals, and there’s even a restrained note of honeysuckle at the edge.

While its predecessors bore a light golden haze, Hazy/DC is almost entirely opaque; perhaps Midday Oil and Clouded House were alternative names on the drawing board. Its appearance matches the dominant experience in the mouth: thick orange juice with the pulp still in it, bringing a slightly tannic feeling to the tongue and a gentle sweetness that carries the other fruit flavours. In terms of bitterness, there’s none to be found until the aftertaste, like ticket stubs scattered across the floor after a concert.