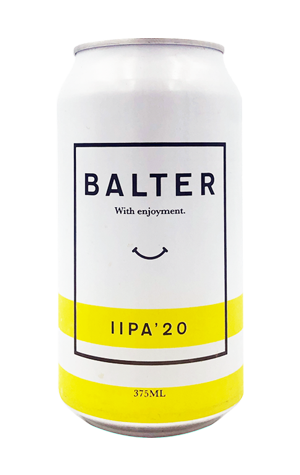 Balter’s IIPA caused quite a stir when it was released in 2018: Balter had well and truly proven their beer-making abilities, so IIPA lovers were ready to guzzle Balter’s version, and Balter fans who were new to the style were keen to give it a try. When the yellow-striped cans made another appearance in 2019 and flew off the shelves with equal speed, it was clear this wasn’t a beer that disappointed people.

Skip forward to 2020 and Balter’s IIPA is back with a "same same but different" vibe. Their new "vintage", IIPA ’20, is built on the same malt base as the former version, which somehow manages to be chewy and rich while still while still finishing semi-dry and enticing that next sip. It’s the hop bill that brings a new dimension this time around.

The move from 500ml cans to 375ml cans means there are only two yellow stripes instead of the four from past releases, but don't worry – there’s nothing "less" about the flavour. Headlining hop Strata, one of the more hyped hop varieties of the past 12 months, is backed up by Simcoe and Aussie Cascade, and the combo is one of the better things to come out of this crazy year. Breathe in a face full of Golden Circle tinned fruit salad, but don’t expect sugary syrup from your first sip; a little sweetness is blanketed by a lot of dankness. The tasting notes on the can push the fruity notes, but don’t be surprised if those tropical fruits take a backseat to resin and mandarin peel and grapefruit zest, which is enough to help this new vintage remind you of the dank IIPAs of old (well, from a few years ago, at least).