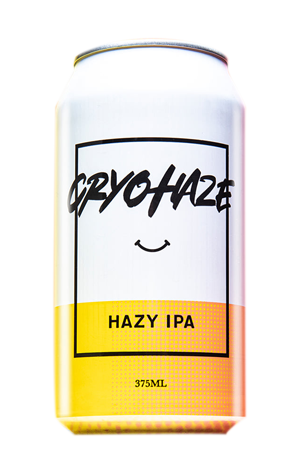 To follow on from the dystopian reference in our write-up of Balter’s earlier release CryoMofo: this week I learned the disgusting sci-fi word ‘corpsicle,’ which refers to a corpse that’s been cryogenically frozen until such a time that it can be revived. You’re welcome.

In more pleasant news, in May, Balter released CryoHaze. When Balter released CryoMofo, a West Coast IPA made with Cryo Mosaic, they promised a Cryo Mosaic hazy would follow in a few months. Head brewer Scott Hargrave described it as putting out “a Jekyll and then a Hyde to see which personality different people connect with.” It’s always difficult to compare two beers tasted several months apart, but I get the impression that Hyde is going to make a lot of friends with all his light-blocking, excitingly fizzy and dry finishing charm.

CryoHaze manages that double-act you sometimes get with a complex beer, where one moment you find yourself picking out flavour after flavour (a bite of ripe stonefruit here; a touch of pith bitterness there; guava and passionfruit tang dancing through here; a piercing layer of resin in the follow-up) and the next moment the flavours go out of focus as you zone out and let the general tasty refreshingness wash over you.