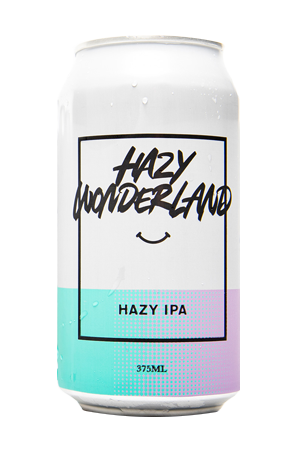 At the start of 2021, Balter promised us a four-part hop experiment in which they’d play around with Cryo hops in West Coast and hazy versions of IPAs. They started by putting Mosaic hops on both sides of the fence with CryoMofo and CryoHaze, then moved on to Cryo Idaho 7 hops starting with Electric Wonderland. Now, with Hazy Wonderland, they’ve locked the last piece into place.

The aesthetics of Electric Wonderland were 80s SoCal; to quote one of the master wordsmiths of our time: “I saw Will Smith wearing MC Hammer pants in Fresh Prince. I saw Blade Runner. I heard the synthesiser riff from Take On Me.”

The Hazy Wonderland tinnie brings to mind the same decade, but this time in the form of Olivia Newton-John’s workout gear in Physical, which, unsurprisingly, is also the song that’s now stuck in my head.

The fruit smoothie character of Electric Wonderland has made a return appearance, complete with an undercurrent of creamy coconut. But this is most evident in the aroma – once you start drinking, the notes in this beer shift from the boppy parody of Physical to the understated strength you see in a Jane Fonda video. There’s pine, there’s grain character, there’s a slight earthiness, and there’s a bitter oomph that tells you not everyone wearing pastel tights is a laughing stock.

Still, Newton-John gets the last word: “There’s nothing else to talk about, unless it’s [holding the beer glass up to your lips] horizontally.”