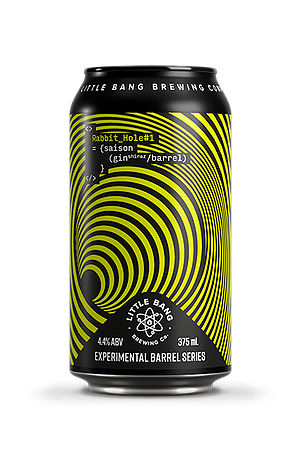 Rabbit Hole #1– since renamed Tangent following a complaint from a wine company of the same name – begins a barrel-ageing adventure for the Little Bang crew, this time in conjunction with Adelaide spirit gurus Prohibition Liquor. Ever since their new venue was opened, a large display of barrels has graced the brewery, but with little communication as to what lay inside. A clever ploy, one might say, amping up the hype of their barrel-aged brand. Tangent #1 is the first release an experimental series that will never see a beer repeated.

They started with a barrel that originally housed shiraz before Prohibition Liquor flooded it with gin. Their base style saison was aged for six months in the barrel, allowing its flavours to weave their way thoroughly through the beer. The plan was initially to blend this beer with something else but, upon tasting the liquid, they decided it was already just right and didn’t require further tinkering.

It appears some of the red wine has left its mark on the beer, slightly deepening its appearance, while the aroma that rises from its persistent white, fluffy head takes on some herby notes, most notably rosemary and lavender. The gin appears too: juniper berries coming through alongside a esters from the saison yeast. And a rabbit hole is exactly where the journey leads, with a multitude of flavours ready to be unearthed. Again, the spiciness is to the fore, creating a subtle perfume before the gin shows its hand and, right at the very back of the palate, the shiraz flickers for the slightest of moments as, like a classic French style saison, Tangent #1 finishes crisp and bone dry.