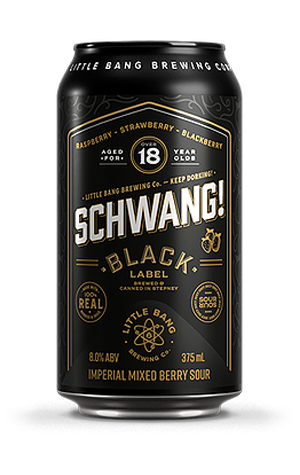 The Little Bang team have decided to add some extra pizzazz and flair to their latest Schwang release, brewing up an 8 percent ABV imperial mixed berry sour as a tribute to its predecessors. Housed in a fancy black can detailed with decorative gold trimmings, the "Black Label" Schwang contains three different berries: raspberry, strawberry and blackberry berries and juices, which lend the beer a light pink-orange hue. In short, it's boozy, it's fruity and it screams Schwang as much as any Schwang to have gone before it.

You're first hit by fruit bowl's worth of aromas: blackberry leads the way, followed by the raspberries combined with a slight earthiness and only a hint of strawberry. The beer's sour side is assisted by a certain berry tartness, while there's a relatively sweet, fruity-sour cordial nature to proceedings too. It’s the blackberries and raspberries again that announce themselves most stridently, with the strawberry balancing some of the tartness with a touch of the sweet, and the spritzy carbonation balancing a slightly syrupy texture.

As "Beer Schwanger" Filip McKemp and "Schwang Aficionado" Ryan MacDavidson put it on the can: “It’s been a Schwanged up year, let’s Schwang it like we mean it people.”