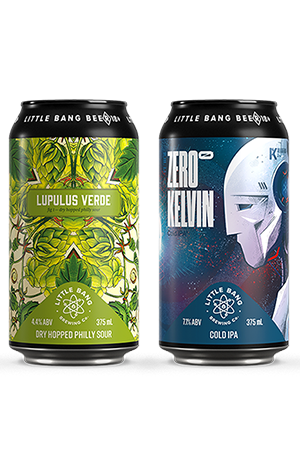 Two spring releases from Little Bang are again a reminder of the brewery’s devotion to design (which is pretty fitting given they were released almost exactly a year on from the brewery winning the inaugural GABS Can Design Awards).

Lupulus Verde is a dry-hopped sour created for the season, and it’s not just the zippy sourness from Philly Sour yeast or Amarillo and Citrus hops providing those vibes. The kaleidoscopic design features botanical drawings of hops and barley and, in total, the brewery has released 30 different unique can designs for the beer which, if that sounds like a lot, remember it comes from a place that once released 12,000 hazy IPAs at once. Once you crack open your own can, you'll find quite the mix of sherbety lemon, further citrus, floral, piney and slightly grassy elements, which come together to provide a sunny hit aided by the beer's substantial but not overpowering tartness.

Then there’s Zero Kelvin, a robot seemingly plucked from an Isaac Asimov novel that’s arrived on earth with a desire to overcome haze in beers. OK, so it's not an actual robot, but instead a cold IPA; something of a new style which you can learn more about here. Though Zero Kelvin is devoid of any haze and pours stunningly bright and golden, there are some elements that mean it's not so removed from the clutches of haze.

At first, the hops come together in a combination that's heavy on the tropical notes of mango and pawpaw, along with stone fruit, which creates an impression similar to the approach to many modern hazies. That's before the pine and a serious bitterness take you closer to a West Coast, while the beer's crisp and lean structure take you to another place entirely. Which is to say it seems a fitting entrant into an emerging style.