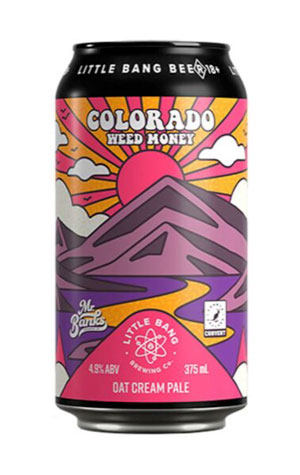 If you're going to brew a beer with the crew at Banks, there's a good chance it's going to be hoppy and hazy, given it's what the Seaford brewers are best known for, even if they've released some damn fine lagers and dark beers over the years. Here, Little Bang did just that, making it an oat cream pale for good measure too, and adorning it with a suitably dreamy, sunset landscape on the labels.

It's a rather different beast to the vast majority of of oat cream pales, IPAs, and DIPAs I've come across, however, and that's down to the way the hop character presents. If I were a betting man, I'd have put money on there being some classic US hops in the mix, maybe even some of the newer arrival Talus, thanks to the piney / woody element shot through its midst. Turns out it's brewed with Citra, Mosaic and Vic Secret, but however they got there Colorado Weed Money's creaminess comes off as more vanillin than the fruit-crème-squeezed-from-an-after-dinner-chocolate you get with many oat cream beers.

It's as full and rounded on the palate as you’d like, even at its sub-5 percent ABV, and moderately hazy, with a lolly like edge to the toffee malt sweetness. A welcome change from the tropical fruit leaning oat creams out there and little surprise it's a limited release that keeps coming back.