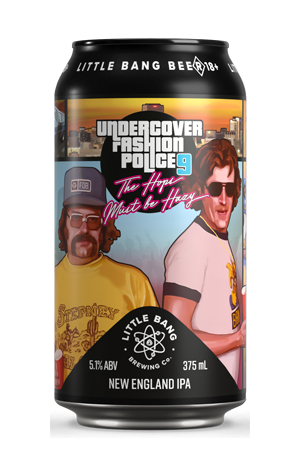 The Undercover Fashion Police series is a one in which the Little Bang crew take the piss out of trendsetting – ironically, in the form of a NEIPA. Now in its ninth edition, each release is altered slightly on the hop front while all sport a pun-driven movie title name of sorts. The Hops Must Be Hazy references the 1980 movie The Gods Must Be Crazy which, in case you are wondering, tells the story of a remote African tribe and the aftereffects of finding a soft drink bottle dropped from an airplane; apparently, it was a utensil from God. So, complete with the beer's signature Grand Theft Auto style labelling, is this a gift from the gods?

True to style, The Hops Must Be Hazy is a fruit bowl of fresh juiciness, rockmelon, orange, grapefruit and touch of apricot derived from Melba, Amarillo and Citra hops. The appearance is not over the top murky but instead a decent haze sits within a deep, orange-coloured beer. The mouthfeel is pretty full, quite soft and creamy, with pithy orange and bitter grapefruit dominating the flavour. There's a touch of bitterness on the back palate, but nothing overbearing, while the upfront sweetness segues into a medium dry finish.