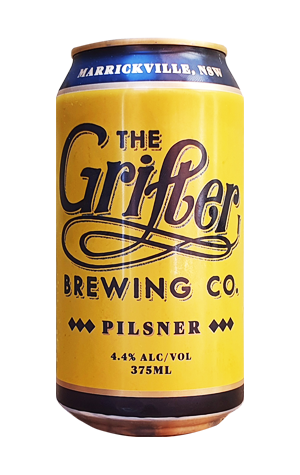 The Grifter crew love brewing all kinds of beers with all kinds of flavours. But you know what else they love? Pilsners. They can’t get enough of them. So late 2019 has seen them finally get around to adding a yellow-tinned pilsner to their core lineup.

I’m talking about this Pilsner. A tight, bright and light pilsner. A pilsner with a subtle aroma like those wholegrain cereal rings but without the sugariness. A pilsner that introduces low levels of spice and bitterness in equal measures as it fizzles on your tongue. Granted, it’s not quite a traditional European pilsner; it’s a new world Pilsner, turning to New Zealand hop varieties rather than using noble hops. But the citrus notes from the Motueka and Riwaka are gentle and fresh rather than dominating, and give way to a dry, slightly grassy aftertaste.

When you’re after a good ol’ easy beer, it’s hard to go past Grifter’s Pilsner. And, to top it off, this is also the first beer from Grifter to use compostable four-pack carriers. The carriers are made from reclaimed sugarcane pulp, and are the result of Grifter approaching Biopak to find a more eco-friendly solution for packaging beers - both for them, and for other brewers.