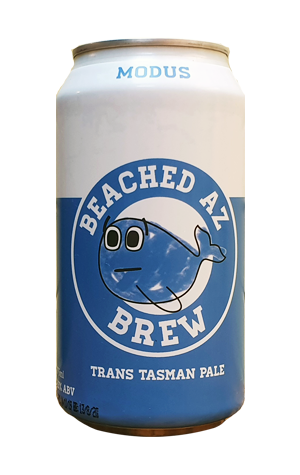 Cult cartoon Beached Az made a return recently in the shape of a new ten-part series to mark the decade of whale and seagull's first adventures on the ABC. The shows – and accompanying documentary series Teached Az – focus on issues such as climate change, overfishing, the impact of plastic on beach and ocean life and so on. As whale and seagull tell Josh Pikefish in one episode, if you want to get a message across to someone it's best to do it in a positive manner.

And what could be more positive than making a beer with one of the country's top brewers to help spread the word – and then donate $1 from every pint and 20 cents from every can sold towards cleaning up beaches and oceans? So that's what they've done, with the show's creators joining forces with Modus Operandi to create Beached Az Brew, a pale ale featuring 50 percent Aussie and 50 percent Kiwi hops.

Hazy and pale, it brings suitably tropical vibes from the off, with grapefruit and citrus in the mix too. There's a touch of resinous grip and a pith like drying bitterness underpinning the otherwise smooth manner in which it washed across your palate, putting it in aggressive summer ale or session IPA territory. Just the sort of beer to reach for when you're parched az. Combine that with the good intentions in every glass and it's, well, epic, bro.