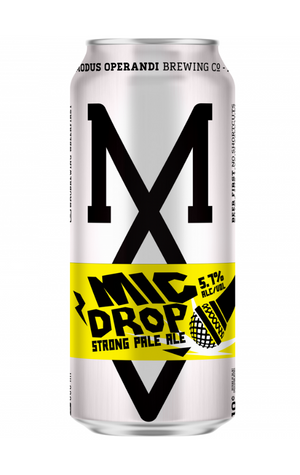 I love the smell of orange oil. An orange twist is my favourite garnish on a cocktail, and I’ve said in another write-up that whenever I eat an orange I walk through the house squeezing the bits of peel to spray orange oil in each room. (Believe it or not, yes, my wife does make fun of me for this.) So I when I poured out a can of Mic Drop and inhaled the strongest aroma of orange oil I’ve ever smelled in a beer, I was enchanted.

As clear as the aroma of orange oil coming off the top of this beer is, it isn’t alone: there’s also the distinct smell of lemon oil. It’s uncanny. It’s like someone is spritzing a bit of orange peel into one of my nostrils while someone spritzes lemon peel into the other. I’m struggling to believe those fruits aren't in there. The particular hop combo in Mic Drop – Galaxy, Citra and Amarillo – is summoning some kind of citrus peel magic.

Anyway, enough of my love affair with orange oil. This beer has more going for it: a big billowy head; a bready malt quality to blend with the toned-down citrus that reaches the tongue; a dry bite of bitterness that clamps down and doesn’t let go.

Damn. That aroma though…