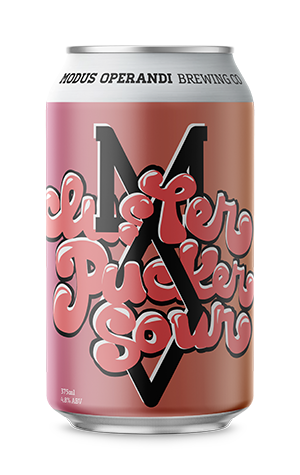 Few, if any, would argue that the past few years have been a clusterfuck, so perhaps we can view the naming of Modus' late '22 sour as something of an acknowledgement of what has been – a line in the sand, perhaps – and prepare to move into an uninterrupted summer of socialising and good times. Heaven knows, we all need it.

So, what does it suggest when you give a beer such a name? In an era in which we've had drastically sour beers, pickle beers and the like, you'd be forgiven for expecting something GABS-esque: designed to give your palate an experience of the sort you might not fully enjoy, but you're unlikely to forget in a hurry. Certainly, with the combo of pineapple, peach and lychee, they've come up with a fruity trio I've not seen in a beer before. Yet any thoughts of a challenging clusterpuck awaiting you inside the cans are quickly dispelled.

Aromatically, taking a sniff reminds me of sticking one’s nose into a just-opened bag of lollies of the tropical fruit jelly variety. That or a fruited iced tea. If my role here was to hand out podium spots for the impact of the fruit additions, it would be 1. Pineapple 2. Lychee 3. Peach, while the pucker is more refreshing than anything face-inverting, as if it's beer masquerading as wine cooler.