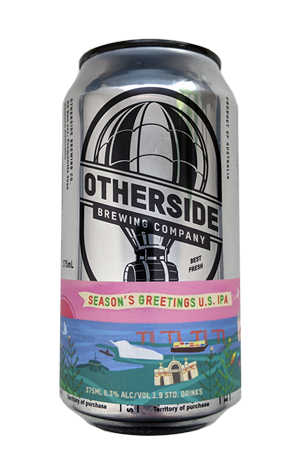 Who drops a new release two days out from Christmas?!?

As if proving a point, while getting festive at the same time – because who doesn’t want to be canning on December 23 – Otherside’s Season’s Greetings has maximised the "out of can opacity" (see this video for context) with a visual density that wobbles in the glass like jelly looking for the rest of the trifle ingredients before the party can start. And start it does, quite unexpectedly, too, with fruity orange marmalade and subdued pine and resin expressed through a New England IPA's foggy lens.

It’s a neat trick that takes place without the needs for a tropical party shirt’s worth of equatorial fruit descriptors. So well done, Otherside, you’ve delivered a THICC old school West Coast IPA featuring classic US hops, rye and oats that’s bereft of bitterness and clarity… looks like Christmas has come early.