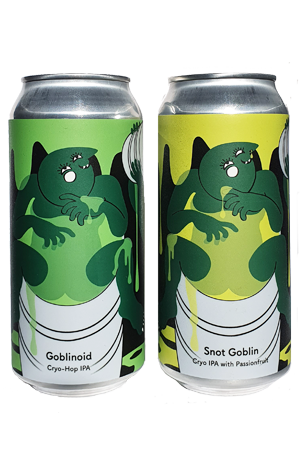 Tallboy & Moose have let two mischevious goblins loose from their Preston brewpub in cans that, for our part, brought to mind the illustrations that covered Roald Dahl’s books. Both goblins are 7 percent ABV IPAs that showcase the power of Cryo hops, a relatively new form of concentrated hop power from Yakima Chief Hops that aims to get as much aroma and flavour into a beer.

In the case of Goblinoid, the combination of Cryo CTZ, Mosaic, Chinook and Centennial packs a whole heap of tropical fruit and pine. We mostly picked up grapefruit and pineapple with the resinous finish joined by a big bitterness in a beer that doesn’t look too dissimilar to grapefruit juice.

Snot Goblin is the second of those releases, brewed in collaboration with Footscray’s Mr West and featuring the addition of passionfruit. So little surprise when a big whack of passionfruit leaps from the beer while also adding a slight sweetness. Given it’s a little creamier than Goblinoid too, this one is more reminiscent of a homemade slice.