Beer Rocky Ridge Wake Me Up Before You VoVo & Karl's Thickshake 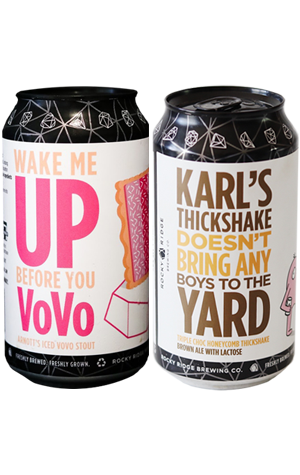 Rocky Ridge add another notch to their collaborative belt with the release of Wake Me Up Before You Vovo, one of two decidedly sweet treats leaving the brewery in May. This one is a nod to the cult figure that is the Arnott’s Iced VoVo, adulated in the form of a raspberry, vanilla and coconut spiked milk stout.

WMUBYV, was brewed in collaboration with Perth Homebrew Share, a 6,000 member homebrewing club in Western Australia. Initially, Rocky Ridge put forward a competition to the members who submitted their recipe of choice before a finalist was chosen and the recipe finalised by head brewer Ross Terlick. The winner was Mitch Munro with all other entrants receiving feedback on their entries and were encouraged to brew along with the Rocky Ridge team, at home, via live stream.

Raspberry is the key feature thanks to the 84kg of puree that made its into the fermenter, along with 15kg of shredded coconut and a generous whack of whole vanilla pods. Iced VoVo vibes are definitely present, with punchy notes of sweet-sour raspberry and toasted coconut blending effortlessly with the chocolatey base beer. A touch of residual sweetness reaffirms that WMUBYV is a confectionary-based dessert stout.

This collaboration came at a time when homebrewers were locked away in isolation due to COVID-19. Through reaching out via social media, the Rocky Ridge crew were able to deliver a concept that bought people together and resulted in a tasty, noteworthy beer.

Now, if a triple choc honeycomb thickshake doesn’t remotely sound like something that could be translated into a beer, then Karl’s Thickshake Doesn’t Bring All The Boys to the Yard might have to be seen to be believed, and if that sounds like a bit of a mouthful, well, it might need to be… drunk to be believed?

Starting out life as a 7 percent ABV brown ale, KTDBATBTTY is loaded with a heap of lactose plus 100kg of local honey and 30kg of cacao nibs. It might seem like a lot to comprehend but, surprisingly, the components combine to create a solid, viscous brown ale displaying huge floral notes of rich chocolate and sweet honey that are so well put together you might even forget the absurdity of the name and concept.

A velvety body transports bold, bitter cacao and sweet caramel notes alongside a moderate 25 IBU, that contributes some necessary bitterness to an exceptionally rich and full malt-driven ale. Anchored by a biscuity brown ale grist, adjuncts and solid recipe formulation yield a very drinkable and very playful addition to the Karl series of Rocky Ridge brews.