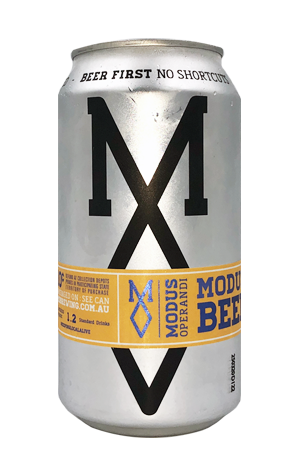 The brewery might have first made a name for itself on the back of big, trophy-winning, hop forward releases but anyone who knows Modus - particularly its locals - knows the team like to keep a broad range of beers coming from their Mona Vale home. Beers like Pittwater Premium Draught don’t just namecheck the locale but were brewed with enjoying a beer by the water and drinkers with more mainstream tastes in mind. And now that approachable offering has been followed by what’s simply called Modus Beer.

It’s a beer that, like its name, is aiming for a certain simplicity too: an old school lager where the hops are mostly driving the bitterness with their aromatic capabilities kept on a tighter leash. It’s light, crisp and there’s a slight grainy quality too, while Citra hops give the beer a moderate citrusy, tropical lift.

Given it's a beer with local and locals in mind, the Modus team have chosen to use to celebrate the Keeping Local Campaign too, with the logo and colour scheme adorning the labels.