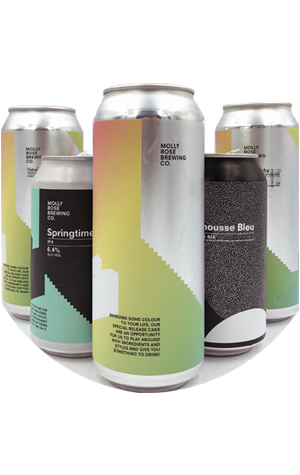 The beers are coming so thick and fast from Molly Rose as they await the day they can reopen their brewpub we've not really got space to include the names of all five here atop the page. But if you're a fan of Belgian styles, funk or banging modern IPAs, you might like to find space for one or two in your belly.

Working through them in the order they appear in my tasting notes brings us first to the biggest, Pamplemousse Bleu, a Chimay-inspired, 8 percent ABV strong Belgian that's equal parts darker Belgian ale and herbal liqueur. There's a boozy, woody, citrusy character decorating a beer very reminiscent of a hearty Chimay, awash with honey, sweet toffee, hints of banana and dark, fruity spices.

Lil' Peachy (5.5 percent ABV) could just as easily be called Massively Moussey as it flares up into a head that makes peering into your glass like peering out the window as your airplane (remember them) breaks the clouds. There’s not too much peachy about the aroma, which is more in the drily spicy, mildly barnyardy farmhouse camp, with some light, citrusy embellishments. There’s a fleshy peachiness to taste, however, adding a little sticky sweetness In another well-judged, farmhouse refresher made by blending young and old barrel-fermented beer with a third beer that spent some time on white and yellow peaches.

Springtime IPA (6.4 percent ABV) is another addition to Molly Rose's growing lineup of top notch contemporary IPAs, hitting you first with plenty of sticky Mosaic berries and blackcurrants, before the likes of Cryo Idaho 7 add lashings of ripe Jaffa oranges and pineapple. There's a welcome malt sweetness from the use of English Maris Otter malt while a yeast designed for hazy IPAs boosts the hops' fruitiness further.

Philly Sour pours, like Lil' Peachy, with a full, moussey head, from which rises a sweetly acidic funk. It sits alongside stone fruit and an apple cider character, suggesting there's some older liquid in the mix, but there isn't, so it's presumably the result of the oak fermentation and Philly yeast strain. You can picture this 5.3 percent ABV drop as the afternoon session beer at a Belgian wedding.

Which just leaves Table [Grape] Bier, a 6.8 percent ABV beer made with 300kg of table grapes that weren't up to supermarket size. Spritzy with a fast dissipating head, it's vinous yet sour, with plenty of grape character, refreshing acidity and a lifted finish. A far better use of grapes than just eating them.