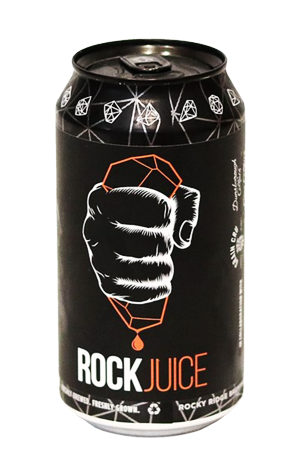 Rock Juice has already garnered much critical appraise and attention for its seventh release, causing a stir that spans Rocky Ridge’s Jindong brewery in the South West all the way to select venues and bottleshops throughout WA. The uber-limited release is deservedly hyped, a beer that's seldomly released but heavily hopped and a high achiever in the hazy IIPA category.

This time around, a multi-layered American hop bill features, a noteworthy change from the previous few batches that were loaded exclusively with Australian hops. El Dorado, Strata and Samba fill out a globetrotting hop schedule that manages to squeeze in more than 30g of hops per litre, all added in the whirlpool and across multiple dry hop additions.

The trio of hops yield a mouth-watering jumble of tropical and citrus fruit flavours. Pineapple, mandarin, mango and orange all feature prominently, while the timing of the hop additions produces just 30 IBUs and a subtle, resinous bitterness. Triticale and oats added in the grist provide the necessary haze and help to forge a lasting, creamy mouthfeel that contributes to the 10 percent ABV going almost entirely unnoticed.

Heavily-hyped beers usually cop their fair share of criticism and scrutiny. Rock Juice V7, (like many versions before it) however, makes finding fault very difficult. Hype and exclusivity aside, Rock Juice is well put together and deserves merit on drinking quality alone.

You can now check out our online event with Rocky Ridge, originally streamed live for Crafty Cabal members, here. Apologies for the slight syncing issue that happened when YouTube saved the show as it was perfect live!