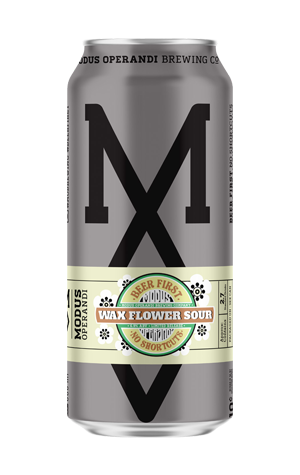 Native ingredients were used by craft brewers in Australia well before the current climate of anything goes (and why not try that too?). Barons were using black wattle in a beer back in the Noughties and these days, while there are brewers better known for playing in such realms than others – the fearless foragers at Sailors Grave, the growing band of wild ale brewers, the part-Aboriginal-owned Spinifex, Northern Beaches-based Nomad, Beerfarm in their Fervor collabs, to name but a few – it does feel like a broader spectrum are looking at what the unique flavours of Australia can offer them in the brewery.

For their first nationwide, tallboy tinnie, limited release of 2021, Modus Operandi have chosen to celebrate Geraldton Wax, a flowering shrub native to WA. They've done so within a 6.9 percent ABV beer, and it's interesting they used the turn of phrase "straight off the bat" within their promotional notes, as one of the first thoughts I had when swirling it in my glass was of preparing a new cricket bat for the upcoming season back in my early teens.

That burst of nostalgia was joined by one of another, of more recent vintage: enjoying a lazy day of indulgence at a hot springs. The reason for both comes down to the herbal, spruce-like qualities the flower lends to the beer; a few sips in and I'm picturing taking a horse ride in the woods after an overnight downpour, which is odd as I've never done such a thing...

The weighty booze content contributes a viscosity that ensures the acidity is smooth rather than sharp, before a lingering, cedar like finish rounds out a most singular experience.