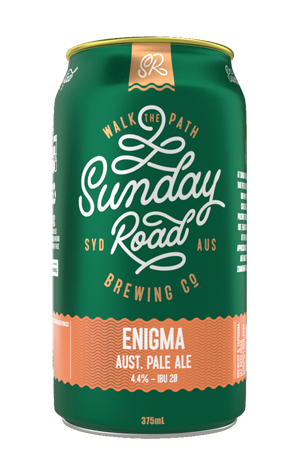 Not too many breweries will lean on a single hop for a core range beer, but this take on an Australian pale is Sunday Road’s flagship.

Founder Brad Walker first made it in his homebrewing days; at a time when everyone else was climbing over each other to get their hands on Galaxy hops, he was looking for something different. He found Enigma.

It was the first beer he brewed together with now head brewer Mick O’Rance, who joined him in his garage in the early days of their acquaintance to brew a batch. It was the first Sunday Road beer to go to market. And, at time of writing, it still outsells all of the brewery’s other beers – in fact, it almost outsells them all combined.

It’s not hard to see why. Lifted flavours of citrus and crisp pear sit alongside pineapple and lychee in their lightest form, and it finishes delightfully clean. It has the bright, slightly acidic character to replace champagne as an accompaniment to oysters… but it also cuts through the fat of a slice of pizza like a champion.

Ask Brad which Sunday Road beer is his favourite, and he’ll tell you: “I usually drink whatever’s freshest out of the tank! But probably Enigma. I could drink that all day.”

I’ll gladly join you for that day, Brad.