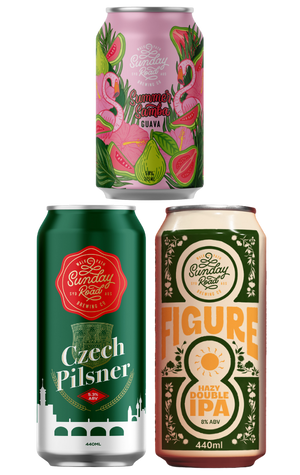 Another fruity sour from Sunday Road, with this entrant in the Summer Samba series is a little simpler than the previous ones, with the guava purée bringing a just bump of its flavour to the tart base. I’ve always found guava to be quite an understated fruit, and it is so here: expect a floral tang rather than a fruity blast.

Don’t be fooled by the colour of the can, which is the same pink as the flamingos that have become the mascot of this series. Summer Samba Guava pours a cloudy apricot-orange colour, with a subtle pink blush deep in the heart of the liquid.

When you come to Sunday Road’s Czech-style pilsner – aptly named Czech Pilsner in contrast to their usual naming conventions – you won’t see any cloudiness or second colour. It’s bright and it’s gold. The only thing you’ll see deep in the heart of the liquid is the perfectly formed bubbles rising to the surface.

SR have used pilsner malt that’s been floor-malted in the Czech Republic (if you have five or ten minutes, this blog post by Beervana helps you feel like you’re inside a traditional malthouse in the Czech Republic) and Saaz hops to give the best interpretation of a Czech pilsner they could make at their Kirrawee brewery. The lemony notes, bready spice and a luscious, satiny mouthfeel all say they’ve done a top job.

While they’ve knocked out a number of hazies before, Sunday Road have just released their first hazy DIPA, Figure 8. They held strong to the "eight" theme by making it eight percent ABV and dry-hopping it every day for eight days, and have certainly found a sweet spot.

Between the BRU-1, Simcoe, Centennial and Citra hops, this beer is absolutely oozing with all kinds of fruit character. There’s ripe apricot and nectarine, some acidic pineapple and juicy citrus all clogging up every mouthful. It’s notably thick and sweet and boozy, making the flavours somehow greater than the sum of their parts, and the texture of the beer is mirrored by the embossing on the label. Neat.